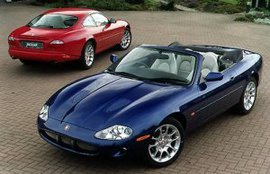 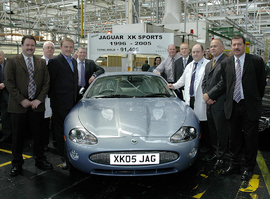 If you own a X100 XK8 or XKR and would like to add your car to our historical register then please contact:

Back on March 5th 1996 Jaguar announced the launch of an all new sports car at the Geneva Motor Show known as the XK8 (project X100).

Further launches followed at the Royal Society of Art in London (March 11), the New York Auto Show (April 4) and then again at Vancouver, British Columbia in September 1996. With the introductory price of £47,950 for the coupe and £56,850 for the convertible the car went on sale to the general public in October 1996 - Jaguar were soon to realise that they had introduced one of the biggest selling Jaguar cars of all time. Designed by Geoff Lawson and his design team the car was equipped with an aluminium V8 engine and the car was immediately considered a commercial success by enthusiasts and press alike.

Two years later on May 6 1998, and following on from the XK8’s success, Jaguar subsequently launched a similar looking but higher performance model known as the XKR, a supercharged version of the XK8. Very little was done to differentiate the cars except that the XKR had far superior handling capabilities and the price of the cars had risen to £59,300 for the coupe and £66,300 for the convertible.

In April 2000 Jaguar announced a special edition XKR known as the “Silverstone”. This model was launched to celebrate Jaguar’s return to Formula One racing and was named after the famous British racing track. Jaguar announced a limited run only of 100 cars (50 coupes and 50 convertibles) and all were finished in Platinum (Silver). Costs were £66,785 (coupe) and £66,080 (convertible). The 100 cars were immediately sold out.

Later that year Jaguar’s Special Vehicle Operations (SVO) announced their own R- version, a further enhanced XKR which cost £5,900 more than the traditional XKR. In 2001 Jaguar unveiled its latest creation in the guise of the XKR100, a model to celebrate the centenary of Jaguar’s founder member, Sir William Lyons. This time the car came equipped with the “R” option package which included up-rated wheels, brakes and suspension. A limited run of 500 models were released at £69,950 (coupe) and £74,950 (convertible) respectively.

In 2003 the latest line of special Edition models was launched. Firstly, the XKR 400, which was an upgraded performance version of the existing XKR (available in both coupe and convertible model). This was followed in 2004 by an XKR convertible known as XKR Portfolio and in 2005 by an XK known as the Victory. The Portfolio and the Victory were built exclusively for the North American market. The XK Victory edition was launched to celebrate the XKs success in the American Trans-Am race series.

Back in Europe the 4.2-S was unveiled at Geneva on 1st March 2005. This was the last XK to be rolled out that was based upon the original 1996 design.

On Friday May 27th 2005 the last of the existing X100's rolled off the Brown's Lane production line. In all, over 91,406 models were produced. Now approaching the X100s 22nd Anniversary the car still remains one of the leading sports cars around. It indeed represented a significant turning point in Jaguar's history. But the story doesn't end there.