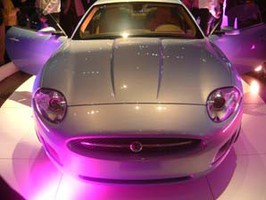 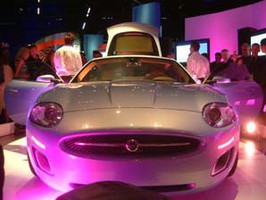 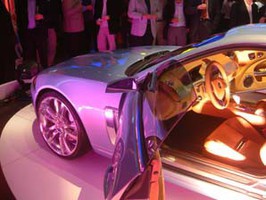 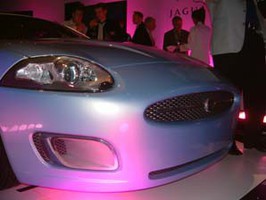 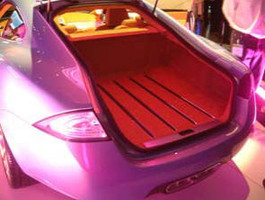 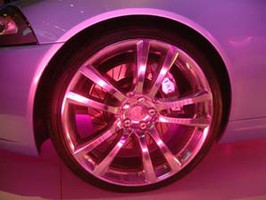 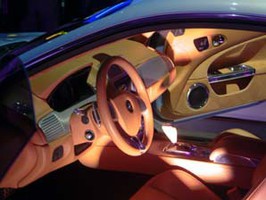 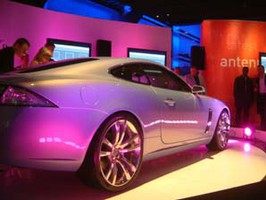 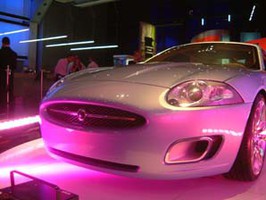 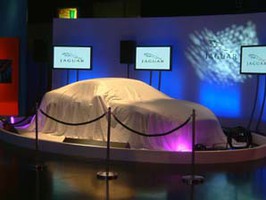 This is an article kindly written for the XKEC by Francois Prins of the Jaguar Heritage Magazine. The pictures shown here were taken by John Jackson at the unveiling in London (14th April 2005). More pictures can be found in the Members Only section.

The US Concept Coupé : Unveiled at Detroit as a concept, the Advanced Lightweight Coupé is Jaguar’s way forward.

It has long been known that the new Jaguar sports car replacement for the XK8/XKR will be the code-named X150. This is due to be released later this year and go on sale in 2006. As the XK8/XKR production winds down at Browns Lane production for the new X150 will already be in hand at Jaguar’s Castle Bromwich plant. Meanwhile, speculation on what the new car will look like has been rife. The clue to the new car may be seen in what the Design team at Whitley have already shown as concept cars. The latest – and most likely the shadowy X150 – has just been released to the USA.

Better still, it is more than a concept and will be offered for sale. On January 10, 2005, the Jaguar Advanced Lightweight Coupé show car made its world debut at the North American International Auto Show (NAIAS) in Detroit, Michigan. The Advanced Lightweight Coupé show car heralds a new generation of stunning Jaguar sports cars and sports saloons. The car remains true to Jaguar’s illustrious past but more importantly signals the company’s confident leap forward into the future. There are styling links between the Concept Eight and the RD-6 design cars already seen in recent months. Joe Greenwell, Chairman and CEO of Jaguar Cars, introduced the show car and said, “The Advanced Lightweight Coupé represents the very essence of Jaguar, its heart and soul. If you want to know what lies ahead for us, what direction we will take – this is Jaguar's answer.” Jaguar North America’s report states: ‘The Advanced Lightweight Coupé is a physical expression of Design Director, Ian Callum’s thoughts and intentions for the next generation of Jaguar cars, which like this 2+2 show car, will have purposeful and seductive exteriors that bring Jaguar design firmly into the 21st century.

This is a beautiful, fast Jaguar, true to the brand's past and future. It embodies sporting luxury and represents the future of Jaguar, as an ambassador for a marque whose reputation was founded on beautiful dynamic sports cars.’ “This company has had many ground-breaking moments,” continued Greenwell. “The XK120 was a ground-breaker and of course the E-Type and XJ saloon in the 1960s helped to change the face of motoring. These were events in automotive design history that have stood the test of time and I would like to think that we will look back on the Advanced Lightweight Coupé as another of those moments in Jaguar's lineage.” Describing the latest Jaguar, the Company’s Director of Communications, Don Hume, said, “It’s an embodiment of the design characteristics we’re working on for future generations of Jaguars. It’s a signpost of the way we're going and the new products are absolutely vital to the future.

The new coupé is entirely a product of Whitley. Future products based on it will be developed there so Whitley is the centre of engineering and development for Jaguar. It takes an increasingly important role into the future.” Jaguar’s stunning new Advanced Lightweight Coupé has a top speed of about 180mph and will retail for about £60,000. A version of the concept is due to be seen in showrooms within a year. That will be just in time for the X150 to be announced and make its debut. Forget the negative aspects and the politics involved about the various sites. If Jaguar is to survive and continue to make great cars it has to evolve and lead, not follow.

With this new concept for a production sports car, Jaguar has shown that they are still at the very front of advanced design. Certainly, Jaguar managed to steal the limelight from the other manufacturers who were showing new models. Look out for the new Coupé at a showroom near you and let your heart and eye be totally delighted by this sublime model that will take Jaguar firmly into a new era of motoring. It is a worthy successor to the wonderful XK8/XKR.