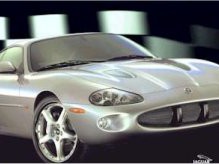 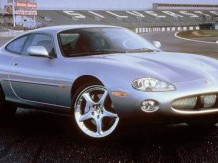 If you own a XKR Silverstone Limited Edition and would like to add your car to our historical register then please contact:

“The XKR “Silverstone” is a celebration not only of Jaguar’s return to racing through Formula One but of our long association with the world famous British circuit, the scene of over twenty Jaguar racing victories. But above all, the XKR “Silverstone”, with its supercharged engine, finely tuned chassis and distinctive style, is a sports car for the true driving enthusiast”.

In the run up to the 2000 British Grand Prix at Silverstone Jaguar decided to take the opportunity to announce the launch of their new Limited Edition XKR, the aptly named XKR Silverstone. The launch of this new car was to celebrate Jaguar’s Formula 1 return appearance to the historic F1 race circuit led by drivers Eddie Irvine and Johnny Herbert.
Based on the already superb specification of the XKR, the new Jaguar was to be given a slight enhancement both in performance and design. The cars were all finished in a Platinum silver paint finish (with convertibles having a complementing black hood) and carried the new unique Silverstone badging. Complemented by a new contrasting leather piped sports interior and a unique “smoke” stained maple veneer facia, the car was also to be given an upgraded chassis and braking system designed by the Jaguar Special Vehicle Operations team (SVO), this included Brembo brakes and sophisticated CATS system (Computer Active Technology Suspension).

More noticeable are the superb but enormous 20in diameter BBS “Detroit” wheels with ultra low profile Pirelli PZero tyres. Being ten inches wide at the rear and nine inches wide at the front meant this particular XKR had a menacing stance whilst maintaining the best handling production car of its class. The engine remained the same 370bhp supercharged 4.0 litre AJ-V8 as in the existing XKR which could accelerate the 0-60 in around 5.2 seconds.

Jaguar decided to build just 100 models in this Limited Edition package, 50 of each in both coupe and convertible mode. To celebrate the launch Jaguar invited buyers of these cars to the Formula One test day at Silverstone on 13 April 2000. They were given the opportunity of watching the Jaguar F1drivers make their final preparations for the forthcoming Grand Prix.

With an on-the-road price when new of £66,785 and £72,185 for the coupe and convertible respectively it was felt that they were value for money compared to rivalry from Porsche and Aston Martin.

The second hand value of this superb car has now made it a much more affordable option, if you can still afford it, it is still probably one of the best XKRs to buy.